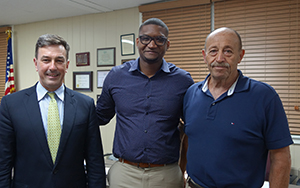 At its June 19 meeting, the Red Bank Regional (RBR) Board of Education announced that its old friend and colleague Julius Clark of Toms River will be its new principal.  He will be replacing long-time employee and administrator, Risa Clay, who officially leaves the district in October and is currently on medical leave.

Julius Clark began his educational career in Red Bank school district just after graduating from the College of New Jersey in 2005.  He taught math in the sixth and eighth grades.  Mr. Clark was named Red Bank’s 2014 Teacher of Year and received the New Jersey Governor’s Teacher Recognition Award. He also served as a head basketball and head soccer coach while at Red Bank.  Mr. Clark obtained his Master of Science in Educational Leadership from Fairleigh Dickenson University in 2012 followed by his Principal Certification in 2013.  He was selected to serve on the Monmouth County Common Core curriculum design project  and worked to  promote academic excellence and equity though his partnership work with sixteen school districts in New Jersey.  From 2017 to the summer of 2018, he also mentored students of various backgrounds in grades 4 to 8 for the Lunch Break Red Bank program.  Mr. Clark left Red Bank this past school year to take an assistant principal position for the West Windsor-Plainsboro School District.

RBR Superintendent Dr. Louis Moore stated of RBR’s new principal, “Mr. Clark will be new to his position at RBR, but he is not new to our community. Since 2005, he has worked closely with RBR teachers and administrators to strengthen articulation, curriculum, and professional development programs. These experiences will assist him in succeeding in his new role. Mr. Clark will bring a commitment to collaboration and teamwork that his colleagues and our committee identified as one of his greatest strengths.”

He states of his new role at RBR, “I am thrilled to be back in this community which is near and dear to my heart.  I intend to focus on educating the whole child so that students are prepared for an ever changing global society and continue to encourage teachers to create a positive, welcoming classroom environment that challenges students to be their best self.”