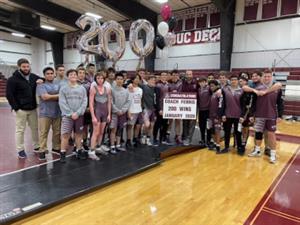 RBR’s Head Wrestling Coach, Scott Ferris, has achieved the 200 team win milestone, which was achieved on Wednesday, January 15, 2020, after beating Asbury Park.  Additionally, Coach Ferris was named the National Federation of State High School Associations Wrestling Coach of the Year for the state of New Jersey.  Recipients must exemplify the highest standards of sportsmanship, ethical conduct and moral character, and be endorsed by their respective state high school associations. Recipients are selected by the NFHS Coaches Association Awards Committee and approved by the NFHS Board of Directors.

The entire RBR community is extremely proud of Coach Ferris’ accomplishments.   We have known for years that Coach Ferris is exceptional.  We are pleased that a national organization is recognizing his outstanding traits, as well.