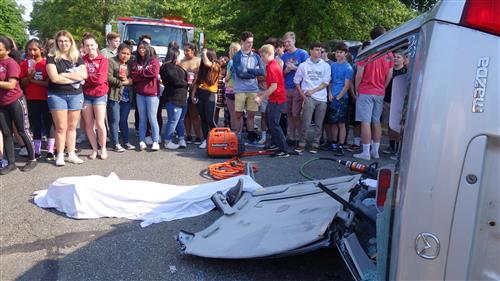 An exciting time in a high schooler’s life, the prom season, is characterized by much preparation.  The students save to buy their prom tickets and their dresses and suits. There is the shopping and the logistics.  Who is going with whom? On the big day, corsages and boutonnieres  are affixed, pictures taken as happy family celebrations precede the sendoff to the big event.  During that week, Red Bank Regional (RBR) administration, supported by the emergency services of Little Silver engages in their own preparations for prom.  Project Prom is a week long program of activities designed to keep students safe by encouraging them to make the right decisions regarding driving impaired.  The program, in its 13th year, was founded and organized by Little Silver Sergeant Pete Gibson, (RBR’s first school resource officer (SRO), and assisted by RBR’s current SRO Andrew Smith.

For decades, statistics have shown a spike in automobile related deaths of young people during prom weekend. RBR’s Project Prom kicked off on June 3 with a dramatic multivehicle crash simulation. Two cars were joined at their crunched front fenders while unconscious teens shriveled within their steel prisons. Little Silver fire trucks and EMS speed to the scene quickly evaluating the teens and springing into action using the jaws of life peeling off e car doors and roofs to remove the injured inside. A third car poised on its side, was left out of the frenzied activity, according to Sergeant Gibson, since it occupant was designated DOA and life-saving attention was reserved for the survivors. The body was later removed from the vehicle and shrouded from the on looking senior class.

RBR’s Student Resource Officer, Andrew Smith, explained to the class that they witnessed a reenactment exactly as performed in real emergencies.  He added that as a Tinton Falls Fire fighter volunteer, this past weekend he was part of a team which extracted a driver who wrapped his car around a tree on the Garden State Parkway.

“You talk about the golden hour of getting help to a trauma victim, that crash was so bad it took us 48 minutes to remove the victim,” he stated.

Following the mock crash the students then heard about the frightening aftermath.  Tracy Nerney, R.N., B.S. The Jersey Shore Trauma Injury Prevention Coordinator graphically explained what happens to the automobile victims if they are lucky enough to reach the trauma center alive (50% die at the crash scene.) From her medical bag she extracted the various invasive instruments that pump up a collapsed lung, or shoved painfully down a throat to promote breathing.  She utilized student volunteers to demonstrate physics where a high speed car hits a tree. She asked “Who wins, in that contest? The tree of course.  And when the body hits the car, who wins?  The car wins.  And when the soft tissues hit the hard bones in the body, who wins then?  The body’s ribs pierce the lungs or the liver or/and the brain smashes against the skull.  The body does.”

She added, “If you get into a situation don’t make it worse. Call us (Your parents.)”

Ms. Nurney had chosen her impassioned profession, because her family suffered such a tragedy 30 years prior when her beloved cousin died in a car crash in which his best friend was speeding.  The best friend survived only to take his own life many years later.  She explained that decisions that are foolishly made so early in a person’s life can disastrously affect their life and others forever.

She also informed the RBR students about community service opportunities in the Jersey Shore trauma center and urged them to contact her at Tracy.nerney@hackensackmeridian.org.

Defense attorney Mitch Ansell, who has represented numerous young DWI clients, explained the strict laws in New Jersey for underage drinking, and, the consequences, stating “Many of my clients tell me, if only I knew how serious this was, I would have made a different decision.”

He warned kids if they have as much as one beer and are driving and pulled over, they will be breathalyzed and it will register at the .O8, which is considered legally drunk.

He added, “Minors will mandatorily lose their license for seven months, must go to classes, will be subject to thousands of dollars of fines and higher insurance premiums and the DWI stays on their record forever.”

He also commented that he felt, thankfully, that our kids seem to be getting the message of drinking and driving and are using designated drives and Huber’s. However, another danger lurks.

Holding up the phone, he stated, “In the last few years, I have developed a theory that there is something more dangerous than a bottle of vodka or a bag of weed.” He asked, “Is your next text more important than your life or someone else’s?”

He proceeded to explain that just a few years ago he represented a college student at Brookdale, who had gotten into a text fight with her boyfriend.  She was still texting him when she struck and killed a priest from CBA who was crossing Route 520 to take a walk in the park.

Students received other advice including that although it is likely that marijuana might be legalized in the state of New Jersey someday soon, as of this prom weekend, it still isn’t and the police have not limited their efforts in enforcing that law.

Project Prom activities continued throughout the week with the police visiting senior classes to reinforce the messages given at the mock crash assembly. Police officers from Little Silver, Shrewsbury, Red Bank, Union Beach and Bradley Beach participated in a day of activities to simulate drunk driving incapacity including requiring students to drive a golf cart around an obstacle course while wearing fatal-vision goggles to simulate intoxication.